Redhat Ansible is an opensource configuration management, infrastructure provisioning and application deployment automation tool which can be used for both cloud and on-prem solutions

Output for the above yml file would be as below: 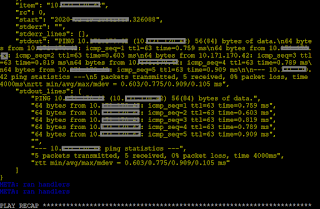 Hope this helps to write simple playbook which will ping servers based on a list. Another enhancement that can be done here is read a list of hosts to ping from a csv and use this YML to ping test those servers